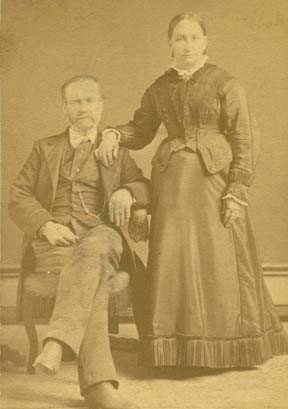 James B. (Beatty) and Lucinda Mahaffie operated a stagecoach stop for the Barlow and Sanderson Stagecoach line.

Olathe, pronounced O-Lay’-tha, is the old Shawnee Indian word for “Beautiful.” The township of Olathe was established in 1857, and later became a stop along the Santa Fe Trail.

Olathe was born at a turbulent time in American history when Dr. John Barton, a Virginia physician, settled here in 1857. At issue was whether Kansas would be free like the Nebraska territory to the north, or a slave state like Missouri to the east.

Many residents came to Olathe to make a new home while others, like John Brown of Harpers Ferry fame, came to battle. The fighting started in Kansas four years before the start of the Civil War. Since Olathe was only 10 miles west of the Missouri border, William Quantrill and his raiders invaded Olathe in 1862, destroying much of the town and killing a half-dozen men. At one time more than 15,000 Union solders were camped along Mill Creek in central Olathe.

After the war, Olathe became a major stop along the Santa Fe Trail. As many as 600 wagons a week traveled through Olathe on the way toward the gold fields and farming settlements in the far west.

Pioneer settler James Beatty Mahaffie built a house in 1863, which he and his family later operated as a stagecoach stop. The Mahaffie farm was the first stop for stagecoaches traveling from Westport, Missouri on the Santa Fe Trail. The two-story native limestone house and several outbuildings have been restored, and the 23 acre farmstead is listed on the National Register of Historic Places.

Olathe is proud of its historical and cultural heritage. The Mahaffie Stagecoach Stop and Farm, as well as the historic Olathe Memorial Cemetery with its inspiring Civil War Circle, and large old homes along tree-lined Park and Loula Streets, are all part of a rich and powerful history.