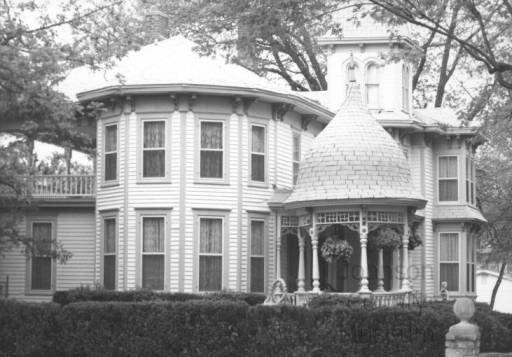 Photo of the Pickering House from the 1996 Johnson County Museum Historic Preservation Survey.

Peace and prosperity enabled the city to develop a more distinct social and cultural character. “Art has added much to nature,” said one observer, who went on to comment on the growth of trees, hedges and shrubbery, the building of houses and fences, and the embellishment of grounds.

The town became a second class city in 1870, having 2,045 inhabitants. The 1870s saw growth in the physical plant at the school for the deaf. Churches, which organized after the Civil War, began to erect centers of worship. A subscription library began in 1874. The first history of the city was written that year.

In 1875, 72 percent of the county worked in agriculture, 11 percent in professional and personal service, 8 percent in trade and transportation, and 9 percent in manufacturing and mining. Olathe’s population in 1875 was 2,146.

Growth was not achieved without a struggle. Crops failed because of drought, tornadoes, and grasshopper plagues in the middle ‘70s. Economic depression, lack of business regulation – especially of the railroads – and social concerns about temperance and women’s suffrage came to a head at this time.

John P. St. John, who made his home in Olathe, began his political career here, was elected governor in 1878 and 1880, and ran for president on the Prohibition ticket in 1884. The Johnson Cooperative Association, an outgrowth of the area grange movement, opened a store in Olathe in 1876, and soon branched into Stanley, Edgerton, De Soto and Gardner.

1883 marked the founding of the Ladies Reading Circle, Olathe’s first federated women’s club, the first high school graduation, and the second written history of this area. Olathe’s population in 1880 was 2,285 and in 1890, 3,294.