Turn of the Century & New Technology 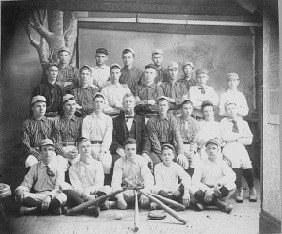 This photo of the 1894 Kansas State School for the Deaf baseball team includes Luther “Dummy” Taylor, who went on to play major league baseball with the New York Giants and the Cleveland Broncos. Photo courtesy of jocomuseum.org.

The decades surrounding the turn of the century saw rapid technological change in Olathe. The decorative Washburn courthouse, complete with steam heat and electric lights, was dedicated in 1892. The event set a corresponding trend in stately home building. Public utilities such as natural gas, telephones, sewers and water treatment came into common use. The automobile could be seen sharing space on Cherry Street with farm wagons and teams of horses.

1893 saw 48 scholars enrolled in the high school course at the old rock school. A separate high school building was completed in 1898, and a football team organized by 1902. The Johnson County Old Settlers Association formed to celebrate the history of the area in 1898.

Serious flooding of the Missouri and Kansas rivers occurred in 1903 and again in 1904. A souvenir photographic publication showing the progressive nature of Olathe was made by F.S. Mickey and G.A. Roberds, and distributed in 1907. That year the first cars of the Strang Line, an interurban electric railroad, reached Olathe from Kansas City.