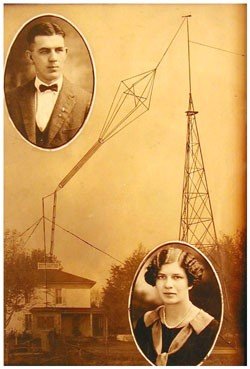 Ensor Farm with Marshall and Loretta Ensor from a 1926 photograph. Image courtesy of Larry Woodworth, Ensor Farmsite & Museum Director–this image was originally published in the January 24, 1926 edition of The Kansas City Journal Post

In 1910, Olathe had a commission form of government, a population of 3,272 (with its suburbs 4,000), and a water-works plant with a basin of 20 acres. A city hall was built in 1911 at the southwest corner of Kansas Avenue and Santa Fe. In 1912, George Hodges, partner in the Hodges Brothers Lumber Company, was elected Kansas governor on a Democratic ticket. Women’s suffrage passed in Kansas that year and the Carnegie Public Library opened. A domestic science and manual training building was completed for the school system in 1913. The Kansas School for the Deaf enrolled 250 pupils that year.

In 1914 the Johnson County Merchants and Farmers Association was formed to aid its members “in saving on advertising, collections, credit, merchants delivery, and free employment department. Over 300 farm hands had been placed by January 1915. Through the cooperation of this association many public improvements have been agitated.”

An influenza epidemic and other diseases created a need for public health safeguards.

From about 1910 until the start of World War I, the Olathe Chautauqua pitched a big tent on the natural slope of Parker’s pasture during the hottest two weeks of the summer. D.R. Ott’s Boy’s Band was organized in 1913. Ed Blair of Spring Hill published the third printed history of Olathe in 1915. Earl Milton Collier, killed at Belleau Wood in 1918, was the first Olathe casualty of World War I.

The need for army boots increased the reputation of the Hyer Boot Factory, and Olathe, in the United States. Olathe population in 1920 was 3,268.

Former Olathe resident Albert I. Beach became mayor of Kansas City, Mo., in 1923, the year Gemmel Memorial Gymnasium opened to student athletes. Kansas City Road, formerly the Santa Fe Trail, was paved in 1925. James “Indian Jim” Brown paved his way into local folklore during a contest among the bricklayers on the new road. The Roaring ’20s was a particularly happy time for Olathe youth.

James Garfield “Indian Jim” Brown of the New York Oneida tribe was a champion bricklayer who traveled to Olathe in September 1925 for the Kansas City Road bricklaying competition. Indian Jim bested Frank Hoffman of El Dorado by laying 218 tons of brick – 46,664 bricks in seven hours and forty-eight minutes in a drizzling rain to win the contest. He received a $200 prize along with his regular wages of $2 per hour.

In 1926, students at John P. St. John School in Olathe selected the Eagle as their school mascot as tribute to Chief Eagle and contributions of his Native American tribe that migrated through Western Olathe prior to 1854.