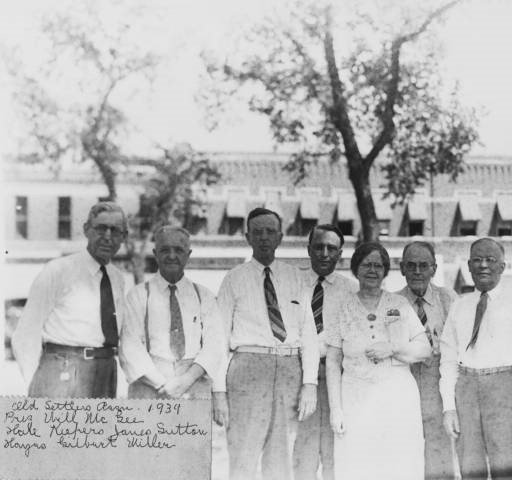 The 1930 census certified 3,656 Olathe residents and 27,179 in the county. The balance of the population in Johnson County, stable since the 1880s, began to shift toward the northeast.

Olathe was described as “a prosperous market town of pleasing residences and stately elms. So popular is the courthouse with couples eloping from Missouri and eastern Kansas that the town has become a local Gretna Green. Judge Bert Rogers, father of Charles ‘Buddy’ Rogers, orchestra leader and motion picture actor, presides in its ‘Cupids Parlor’ which is decorated with more sentiment than restraint.”

Lake Olathe (now Cedar Lake), covering 57 acres, was constructed in the 1930s. A swimming pool was built under the Works Progress Administration in 1934. It was located in the City Park at Poplar and Woodland. A Colonial-style post office was constructed at a cost of $90,000, and dedicated at Old Settlers in 1939. Albert T. Reid, an artist of national reputation, created the mural “Romance of the Mail” for the new building under WPA grant. Bus service for rural high school students began in 1938.

The first Olathe residents to die in the war were Harlan H. Harper and Don W. Roberds. The Olathe Naval Air Station was commissioned Oct. 1, 1942. In May, 1943, a tornado destroyed more than 100 airplanes. Housing was at a premium because of the migration of military families. The Navy Hill area was constructed to alleviate the shortage. The presence of the military jolted a 50-year social and economic status quo for Olathe. After the war, rapid development in the northeast part of the county set the stage for the urbanization of Johnson County and Olathe.