A New Vision & A New Century 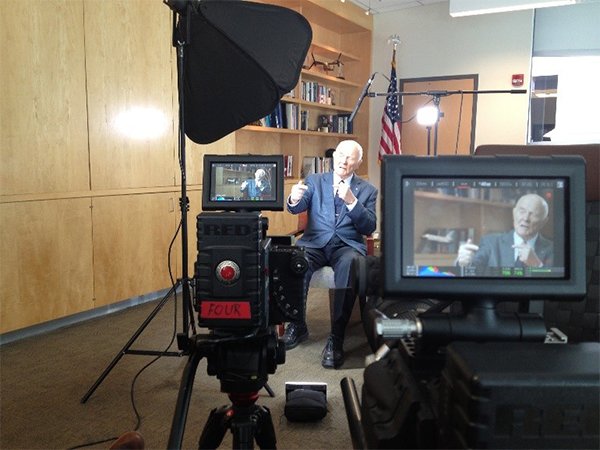 Greg Sheffer, director and producer of the Olathe: The City Beautiful file series, interviewed John glenn for the file “The Flying Jayhawks”, the story of the Olathe Naval Air Station.

In January, 2004, Money Magazine listed Olathe as the third “hottest” town in the central United States, and in July, 2006, Money ranked the City of Olathe 13th on its Best Small Cities list, reaffirming the outstanding quality of life Olatheans enjoy.

With input from residents, Olathe’s first Strategic Plan was adopted in 2001, establishing Olathe’s 20-year vision in the strategic areas of transportation, public safety, active lifestyles, public services, downtown, economic sustainability, and diversity. The Strategic Plan was updated again in 2004 to ensure that it adequately reflected the priorities and direction supported by the Olathe community.

Olathe leads the metropolitan area and the nation by being the first to implement an Automated Traffic Management System (ATMS). Operational in 2005, the system works to alleviate congestion and improve traffic flow.

In 2005, construction started on two of the most important transportation projects in the City’s history – the 127th Street Overpass at I-35, and the Railroad Grade Separation Project west of I-35, which will eliminate four at-grade crossings at Loula, Park, Santa Fe, and Ridgeview.

The City worked cooperatively with U. S. Senators Roberts and Brownback and Congressman Moore to secure funding for a third critical transportation project – the Lone Elm interchange at I-35. As of July, 2006, 95 percent of the funding for this interchange was identified.

Nearly 2 million square feet of retail and over 1 million square feet of office space were constructed in Olathe, and the community saw a 20 percent increase in job growth in five years from 2002 to 2007. New developments included the GARMIN expansion; the Farmers Insurance Group Regional Call Center; the KVC Behavioral HealthCare Corporate Headquarters and Ball Conference Center on the Olathe Medical Center campus; the Corporate Ridge Office Park at Ridgeview and K-10; and the Olathe Pointe shopping center at 119th and Black Bob Road. In early 2006, Pacific Sunwear announced plans for a 420,000 square foot distribution center at 167th and Lone Elm Road.

A foundation-laying ceremony was held in May, 2006, for the new Olathe Bass Pro Shops store, which anchors 140-acres, $268 million Olathe Gateway center at I-35 and 119th Street.

The Olathe Fire Department is one of the best in the region, and the City has worked to ensure that quality fire protection services are available for all areas of Olathe. A contract was awarded in January, 2006, for the design and construction of Olathe’s 7th fire station, located near Mur-Len Road and 161st Street.

Olathe’s parks, recreation facilities, nationally-recognized recreation programs, trails, swimming pools, and historic sites also contribute to the community’s quality of life and economic vitality. In 2004, citizens voted to expand and improve the City’s parks and recreation opportunities by a projected $27 million through continuation of the 1/8-cent parks and recreation sales tax.

Funding was approved in 2005 for the new Heritage Center, a museum and visitors center to be constructed east of the Mahaffie Stagecoach Stop and Farm. The City has continued its commitment to the care and preservation of the Mahaffie site, which brings Olathe’s rich and colorful history alive for the thousands who visit the site each year.

In 2006, the City acquired the historical Ensor Park and Museum, the former home of amateur radio pioneer Marshall H. Ensor.

Five years from 2002 thru 2006 marked the dedication of several new and expanded City facilities to serve the public. These include the new Olathe City Hall, R. R. Osborne Plaza, and Municipal Services Center in 2003; the Fire Administration and Life Safety Services building in 2004; the new Olathe Municipal Court building in 2005; and the $20 million expansion of Water Plant No. 2 in 2006, which increased capacity at the plant from 17 million gallons to 36 million gallons per day.

Looking ahead to its Sesquicentennial year, the City appointed a 150th Anniversary Steering Committee in 2004 to plan events commemorating Olathe’s 150th birthday in 2007. To coincide with Olathe’s 150th anniversary celebration, a new City logo was unveiled in 2004. The new logo celebrates Olathe’s historic past and small town sense of community, while recognizing the changes that occur with rapid growth.